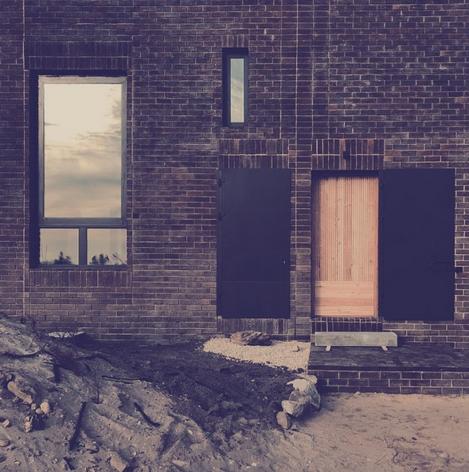 The concept for this home, standing in an abandoned quarry in
the middle of a mountainous fynbos reserve, began not as a response to the engaging vistas, but fundamentally to the prevailing natural forces that surround it.
Veld fires frequent the valley and the building’s position, it’s materials selection and form were critical to it’s long term survival. An existing dam was enlarged and the building positioned at it’s edge. The water body assists as a fire fighting measure and aids in the rehabilitation of the quarry.  The simple rectangular form, devoid of unnecessary protrusions and flammable materials, encourage fast moving veld fires to pass the structure by as efficiently as possible. The entire facade and roof are covered in a dark face brick outer “skin”, aimed at enduring veld fires and alleviating subsequent repairs.
Captivating views down the valley below are forfeited to a relentless pursuit of creating a structure of minimal visual impact: the building is positioned back from the valley edge, exposing only the short facade, with the dark face brick providing the final aspect of the disappearing act.
The northern facade is characterized by deep reveals, not only as a passive solar device, but also to create a sense of retraction into the dwelling, providing refuge in the formidable mountain environment.
The deliberately understated entrance consists of two identical adjoining steel doors, one the main entry, the other a service door. The interior is softened by the use of timber in various forms, creating the necessary refuge, scale and warmth, in contrast with the harsh exterior and landscape.
The ground floor living spaces are connected to the immediate landscape, while the bedroom spaces are raised above the surrounding mound, affording connection to the distant landscape.
The result, an architecture shaped by it’s program and surrounds.